Skip to content
In the first 300 years, Christianity went from a stable in Bethlehem to the Lateran Palace (the official residence of the Roman Emperor). This Palace was gifted to the Church by Emperor Constantine, who moved his headquarters to Constantinople. The positives of the Church gaining this ‘official recognition’ is debatable, but the fact remains, that as a ‘movement’, Christianity was so widespread and had so influenced Roman society that it was honored by the Empire’s highest authority! 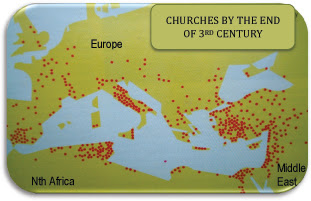 This map from ‘A History of Christianity’ (Lion Handbook) shows the growth of the Church over the first 300 years. This is stark evidence that the early Church had indeed captured Christ’s vision of a ‘movement,’ which Luke had so powerfully articulated in his writings! A movement of people and of ‘peoples’ coming into the Kingdom, as the Church moved out with the message from Jerusalem, to Judea, into Samaria and through ever widening circles towards the ends of earth!
Yes, the Roman Empire provided good roads to travel on and borderless regions for unrestricted and relatively safe travel. But this alone could not explain the amazing growth and advance of this ‘despised and marginalized sect,’ (this being how the “followers of Jesus” were generally viewed, during these times). The Church, with all its faults and frailties, had done, through the enabling of the Holy Spirit, exactly what Jesus intended and commanded it to do!
It should further be noted, that during these centuries, Christians suffered through 10 major persecutions! The last two, under Emperor’s Diocletian and Galerius, resulted in the martyrdom of some 20,000 Christians.
What a powerful example, that history throws at us, of a people of God, who had, collectively, embraced a truly ‘Christ-centered world-view’ and in their time, were fully committed to His cause and purpose! They lived for what Jesus died for!
Had this momentum be maintained, it is hard not to imagine, that in the succeeding 300 years, the whole world would have been covered with people and with ‘peoples,’ faithfully following Jesus!
So what went right in those first 300 years?  And what went wrong in the next – as succeeding generations experienced notable decline?  Looking at these questions will be our focus in coming weeks!